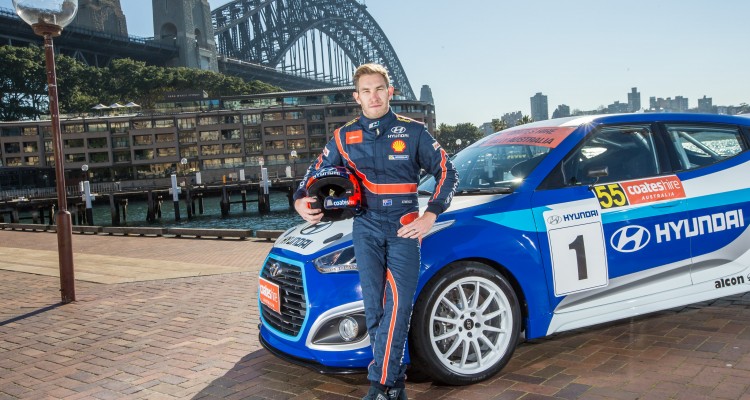 ATKO and Kiwi star Hayden Paddon are among some of the world’s fastest drivers returning for the 2014 Coates Hire Rally Australia on the New South Wales Coffs Coast on 11-14 September 2014.

Atkinson and Paddon, both driving for the top-flight Hyundai Shell Motorsport World Rally Team, took time out of their preparations today to help launch Coates Hire Rally Australia in Sydney.

The duo will give local fans extra reason to cheer as they put friendship aside to challenge for podium glory during round 10 of 13 in the 2014 world championship.

For the third year, Australia’s leading equipment hire company Coates Hire, has secured the naming rights to this international event that puts Coffs Harbour on the world stage and brings unrivalled economic benefit to northern NSW.

Atkinson spent last year as the development driver for Hyundai and is responsible for the stellar performance of the i-20 that has already scored a podium finish in its debut year.

“As a Coates Hire ambassador it’s fantastic the guys will once again partner Rally Australia and support one of the country’s premier, international motorsport events” said ATKO.

“Last year’s event was a fantastic success in 2013 and with even more exciting additions such as the Hyundai Super Special Stage, the Coffs Coast is set for even more action.

“I’m really looking forward to heading out on the stages behind the wheel of the Hyundai Shell World Rally Team i20 WRC and we’ll be charging hard for the home crowd in September” he added.

One of the biggest sports attractions in regional New South Wales, the rally draws thousands of spectators, competitors and supporters. Tens of millions more around the world follow on dedicated daily television highlights that provide an unsurpassable showcase for Coffs Coast tourism.

Event Manager David Catchpole said there were more reasons than ever to buy a ticket to Coates Hire Rally Australia this year.

“We’ll have the new Hyundai Super Special Stage and ARMOR ALL Shootout over two nights, a more compact choice of daytime spectator points with significantly upgraded facilities for a more comfortable and enjoyable experience and a free-entry Hi-Tec Oils Service Park that will pump with action and
entertainment day and night,” Mr Catchpole said.

“Add to that the opportunity to experience the World Rally Championship in the beautiful and vibrant holiday setting of the NSW Coffs Coast.”

In addition to the WRC field, Rally Australia will host rounds of the East Coast Bullbars Australian Rally Championship and the Australian Classic Rally Challenge, plus the Pedders Suspenion Coffs Coast 400 off-road race.