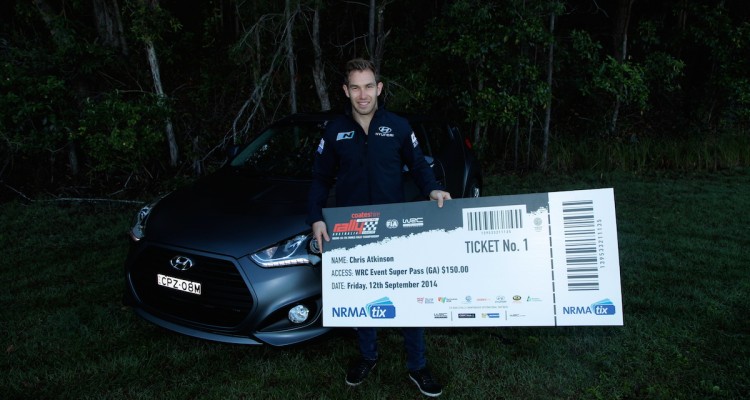 Tickets on sale for the 2014 Coates Hire Rally Australia

Tickets to the 2014 Coates Hire Rally Australia are on sale from today, starting a 100-day countdown to the return of the world’s greatest rally car drivers to the New South Wales Coffs Coast on 11-14 September.

Hosting Round 10 of the FIA World Rally Championship – renowned as the most challenging international motorsport series – Rally Australia will offer fans a wide range of spectator options exclusively through NRMAtix.

Adult General Admission is priced from as little as $35 (*) for a one-day ticket to all daytime spectator points, but the most popular choice is expected to be the $150 (*) WRC Super Pass, which provides three-day entry to every viewing point for $25 less than in 2013.

“With just 100 days to go I can’t wait to get behind the wheel of my Hyundai i20 WRC on my home rally,” Atkinson said.

“Coates Hire Rally Australia is going to be an amazing event. I urge every Aussie fan to book their tickets now with NRMAtix and get ready to see the world’s best rally action right here in New South Wales.”

Event Manager David Catchpole said there were more reasons than ever to buy a ticket to Coates Hire Rally Australia this year.

“We’ll have the new Hyundai Super Special Stage over two nights, a more compact choice of daytime spectator points with significantly upgraded facilities for a more comfortable and enjoyable experience and a free-entry Hi-Tec Oils Service Park that will pump with action and entertainment day and night,” Mr Catchpole said.

“Add to that the opportunity to experience the World Rally Championship in the beautiful and vibrant holiday setting of the NSW Coffs Coast.

“Here we have everything from rainforests to the Pacific Ocean, migrating whales passing pristine beaches, picturesque banana plantations cascading down mountains almost into city backyards and an abundance of accommodation, fine food, wineries and adventure experiences across the rally region.”

Deputy Premier, Minister for Tourism and Major Events and Minister for the North Coast, Andrew Stoner, said: “With just 100 days to go until this major international sporting event, I encourage fans to secure their tickets and start making their travel arrangements, especially given its popularity in 2011 and 2013.

“Coates Hire Rally Australia prides itself on being a family-friendly event that provides thrilling entertainment from the world’s best rally drivers, such as Australia’s most successful driver Chris Atkinson who will compete in Australia for the first time since 2006.

“The NSW Government, through its tourism and major events agency Destination NSW, works hard to secure major events like Rally Australia, which provide a direct economic benefit from visitor expenditure.

“Rally Australia will benefit the Coffs Coast region and the wider State economy, helping achieve our goal of doubling overnight visitation to the State by 2020,” he said.

Dedicated spectating viewing will be provided on 18 of the 20 competition Special Stages scheduled from Friday morning – following a free Ceremonial Start and Coates Hire Rally Show on Thursday afternoon – to Sunday afternoon.

The most popular are expected to be the East Coast Bullbars Rally Village on Saturday on the Nambucca stage and VisitNSW.com Rally Village on Sunday on Wedding Bells, which will witness the globally-televised Power Stage that wraps up Rally Australia.

As well as the WRC field, the rally stages will see action from cars in the East Coast Bullbars Australian Rally Championship, including Classic cars and the Side-by-Side Challenge.

WRC tickets also provide free entry to the Pedders Suspension Coffs Coast 400, Round 4 of the Australian Off Road Championship, which will be run on Saturday and Sunday on a course just north of Coffs Harbour.

Tickets and information including prices, maps and the Special Stage timetable are available on www.rallyaustralia.com.au and www.mynrma.com.au/tix and via Facebook and Twitter.

Public access to Special Stage roads where there are no sanctioned spectator points will be prohibited for safety reasons and monitored by police.