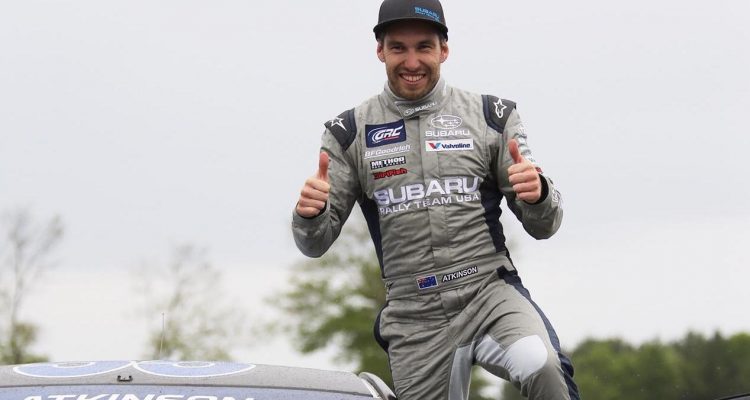 Atko is still considered a rookie in GRC with this just seven races completed to date but despite this drove his 600hp #55 Subaru WRX STI Supercar to a 2nd place finish in his Semi-Final and then charged his way to a 3rd overall finish in the Final at Thompson Speedway in Connecticut.

It was the Australian’s first Red Bull GRC podium.  Sandell meanwhile battled through the field to earn 5th overall in the final, a solid result for the Swede in his first year with Subaru.

“I’m so pumped! It’s my first podium and it feels good to do it for the team, they’ve worked so hard. It’s just a really nice thing to get the ball rolling and go from here,” said Atkinson from the podium celebration. “We got the result we were after, putting both cars in the top five plus a podium, the team is full of confidence now moving forward.”

The 2017 Red Bull Global Rallycross season resumes in two weeks with the series’ inaugural visit to Ottawa and a doubleheader round at the Canada Aviation and Space Museum. Tickets remain on sale for the event at redbullglobalrallycross.com/tickets. Supercar finals from Ottawa will air live on NBC on Sunday, June 18 at 4PM ET.