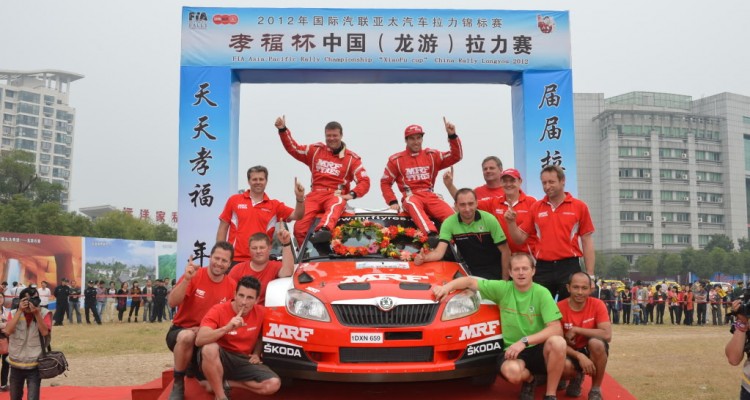 Aussie Chris Atkinson has won the 2012 Asia Pacific Rally Championship with his second place result at the China Rally Longyou enough to clinch the title.

This becomes the Gold Coaster’s first, and biggest, international motorsport crown, captured amongst a raft of extremely competitive rallying talent from across the globe.

“It’s an awesome feeling to take the APRC title after a great year with the MRF Skoda team,” said Atkinson.

“There’s a great lineup of drivers from around the world competing in the championship this season so I’m extremely proud to be flying the Aussie flag high for everyone back home.”

The year has been a solid one for Atkinson with two wins from five events including victory at his home event, the Brakes Direct Rally Queensland, back in May.

It’s been a busy year for Atkinson with dual rallying commitments having him compete in the APRC and WRC, which this year forced the 32-year-old to miss APRC Rally Japan in September.

Despite the absence from Japan, Atkinson’s performances on the remaining five rallies were strong enough to secure Skoda’s first ever Asia Pacific Rallying title since the Championship’s inception back in 1988.

“It’s been a busy last half of the season but thanks to a great team at Race Torque and huge support from Skoda Australia and Brakes Direct we were able to bring our A game all year and produce the ultimate result.

“I also have to thank my family, friends and of course my fans who have shown massive support all year for both the APRC and WRC programs.”

Atkinson joins an illustrious list of former APRC champions including the likes of Carlos Sainz, Possum Bourne and Rod Millen amongst others.

The year isn’t over for Atkinson as he shoots straight back to Europe for the final round of the World Championship, RallyRACC-Rally de Espana – Nov 8-11.