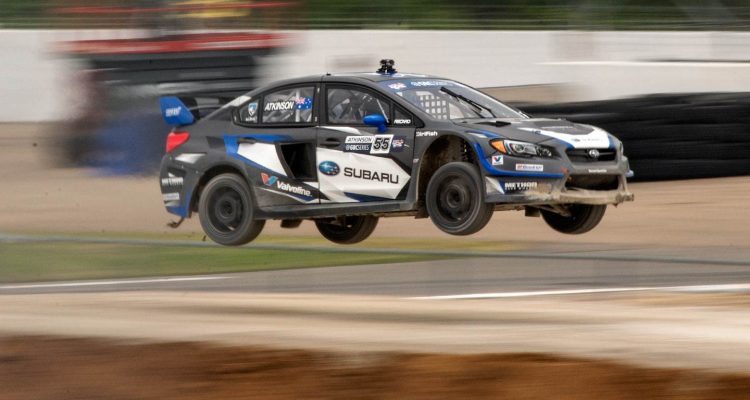 Atko dominated Heat2-A at the first round of the 2017 Red Bull GRC season in Memphis, TN with Subaru Rally Team USA, leading from the start after an impressive launch and pulling away unchallenged to win by nearly 3 seconds.

However, Atko was hit with bad luck in the Final after an electrical fault slowed his pace, although he closed in on fifth place he was later forced to retire from the Final, but was classified eighth overall.

Atko left the event in good spirits despite a tough result in the final. After spending 2016 focusing on testing and development, the team debuted recently signed factory drivers ATKO and Patrik Sandell along with two completely new 2018 Subaru WRX STI Supercars at the Red Bull GRC season opener.

“The team has moved a good step forward; we won that heat early on and we’ve shown some good pace,” explained Atkinson.  “It’s an all new car so we are still improving all the time on the handling setup, but the nice thing is we have barely reached its potential yet and we are already winning Heat races, so that gives us a lot of confidence. I’m really looking forward to the next round.”

After a very busy off-season where the team was busy testing and preparing new cars Team Principal Lance Smith was buoyed by the progress and pace he saw.  “Although we showed progress through the weekend, our result in the Final was less than it could have been. So, we just have to toughen up and go back out there for another time. The best things I’ve heard the drivers say is that we can definitely win races with this car, and I’ll take that home.”